Last year, we praised Anna Serner, the head of the Swedish Film Institute, who achieved her organization’s goal of distributing funds equally between men and women directors in just three years.

Here’s what we wrote back then:

Since she took up her current position in October 2011, Serner has reached her stated intent of distributing state funds equally between male and female filmmakers. As with so many things gender-related, Sweden is the first country to reach this benchmark.

Just two-and-a-half years ago, the agency, which funds about 15 films a year with an average investment of $1 million, had a much more lopsided track record. “When I took over, we had 26 per cent of funding going to female directors,” Serner recalled. “I said that was a catastrophe. I used that word. I wanted the business to realize that there was a new sheriff in town. They are not stupid. They realize I am the head of the funding body, so maybe things are going to happen.”

The policy that had already been in place had a goal for a 40-60 split in favor of male directors — a ratio Serner could only view as compromise. “I said in my opinion 40-60 is rubbish. It should be 50-50 over time,” Serner affirmed. “One year you might have 70-30, but over time you should be able to balance it equally. Talking makes no difference. You have to act. Whatever you do, they will criticize, but you just have to live with that.”

At a private presentation during this year’s Gothenberg Film Festival, Serner shared how she led the Swedish Film Institute toward its record-making 50-50 split. Despite the occasional calls for gender-equality quotas in the rest of Europe, Serner was adamant that that wasn’t her solution. Rather, her answer was ingeniously simple — and necessarily comprehensive.

Wherever Serner and the SFI could identify a source of gender imbalance, they strived to counter it with a solution. Can’t find enough women directors? Try the NordicWomenFilm web portal. Women helmers having trouble funding their second or third films? Ask a female filmmaking veteran how they did it through the SFI’s mentorship program. Not enough young female directors applying for gigs? That’s where support comes in — in schools, camps and regional talent-development programs, all the way through festivals and competitions, with a focus on female role models. And lest the SFI get complacent, it has intensified its self-monitoring to make sure it stays on course.

The results, of course, speak for themselves in terms of the leaps and bounds by which female participation has risen at the upper echelons of the film industry. Check them out (and cringe in jealousy).

Also worthy of envy, though, is the brute fact that Sweden — as a country with a state film fund — has a central force that can spearhead this kind of profound and sustained change, while we here in the U.S. lack such an institution. Let’s hope other countries follow in Sweden’s straightforward logic: If women pay half of the nation’s taxes, they should receive half of its film funding. 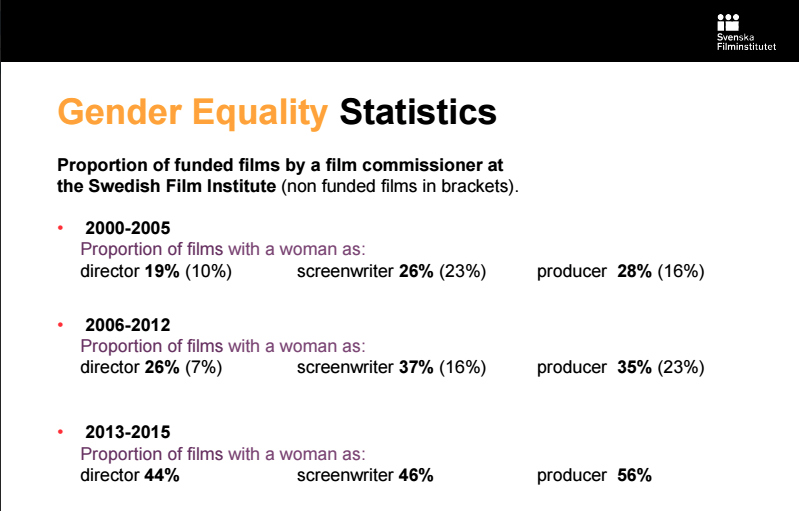